The Science Behind Why We’re Different

ESC Fitness’s Patented Allometric Scaling keeps you from losing qualified, talented workers to faulty testing systems. It also helps to limit your liability and protect you against lawsuits and discrimination cases that often arise due to unfair physical fitness assessments.

With over 40,000 assessments performed, we have created standards and patented algorithms that create a fair testing system for all. It’s fast and easy to implement and provides extensive statistics that also allow you to set goals to help motivate your current employees.

To understand why allometric scaling is so important, let’s first explore a few basic scientific principles related to physical fitness assessment. We’ll then explain how most city, state, federal, and private companies currently implement physical testing standards, why this is a problem, and what type of solutions ESC Fitness can offer you.

When measuring physical performance, it should be understood that smaller individuals are more metabolically active per pound than larger individuals.

In the image below, you can see that two individuals of the same sex with the same exact BMI who clock the same time on the 1.5 mile run do not have the same Max VO2. The smaller individual has a higher Max VO2, indicating greater cardiovascular fitness even though her test results are not better than the larger individual. 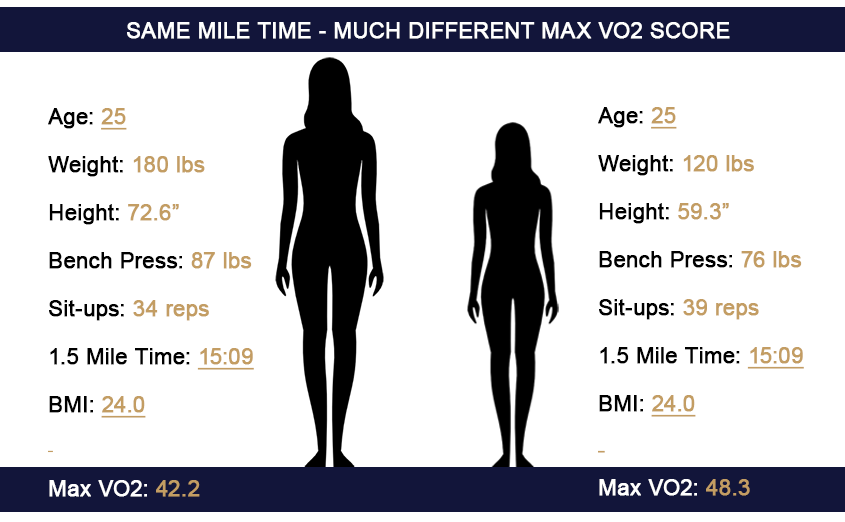 On the flip side, a smaller individual is naturally able to perform more sit-ups when compared to a similarly trained larger individual and would therefore outperform the larger individual in many of the standard strength tests currently being used today. We will further explain this in the next section “The Law of Physics.”

The Law of Physics

In essence, this is exactly what is being done when a push-ups or pull-ups test is used to evaluate the strength between two competing and differently sized candidates. A simple law of physics says that a person who is twice the mass of another does not lift twice the weight. Rather, with the same level of training, that person will lift 2/3rd of twice the weight. Using this 2/3rd exponential ratio, all subjects can be fairly evaluated between one another.

Many cities are seeking to have departments that reflect the diversity of their community. At the same time, many cities do not want to give special preferences to one sex, age, or race.  State and federal precedents require similar pass rates for males and females when performing testing. When compared to their male counterparts, women are on average 40 pounds lighter, possess higher body fat percentages, and have less upper body strength. Therefore, separate standards for strength exercises should be employed.

On the other hand, male and female candidates tested on a bicycle ergometer can reach the same weight to workload relationships when being evaluated. Since women are smaller (approximately 40 lbs on average) and are more active per pound, they can achieve the same work-to-weight ratios as their larger male counterparts.

Why then do male aerobic performances exceed those of similarly trained females? In state championships, the winning times in the 2 mile run are always faster for men versus women.

This takes us back to our earlier explanations regarding METs and Max VO2. In order to relate and compare Max VO2 levels in test results among different candidates, you need to scale to the average weight of the candidate (men and women scaled to the same size). To fairly evaluate men verses women, you must take it one step further.

Thus, the difference in winning race times between the sexes comes down to inherent differences in Max VO2 levels in men verses woman. The average Max VO2 of a sedentary young woman is about 33 milliliters of oxygen per kilogram of body mass per minute, and it is around 42 for a sedentary young man. Elite female distance runners have reached Max VO2 readings of up to 77 whereas elite male runners have reached maxes of up to 85.

Therefore, to fairly evaluate and compare physical performance between one candidate to the next, the results need to take into account allometric scaling for body dimension, and they also need take into account sex.

Older candidates seeking employment into a new department (i.e. laterally transfer) are often under the same scoring charts for their physical assessments as younger entry-level officers.  Our system also allows you to take into the account the normal aging process for a candidate and evaluate them with a grade that is adjusted for age.

THE PROBLEM: AN ARCHAIC SYSTEM

The bottom line is that the current physical assessments that are widely used by many city, state, federal, and private companies are sorely outdated. They were constructed over a half a century ago. They do not compensate for difference in the sex and age of a candidate, and they typically handicap larger candidates because of a lack of allometric or body dimension scaling when it comes to push-ups and pull-ups (two of the most commonly used exercises in fitness evaluations).

Workplace and Legal Consequences of the Problem

Physical assessments should be fair and equitable to every candidate, and the fittest candidates should be identified. This is to ensure that less fit candidates are not selected for service, thereby putting themselves at increased risk of serious injury.

Most companies and departments are completely unaware of the discrepancies in their grading systems. The consequences are often felt not only by the individual who is unfairly impacted in their employment opportunities, but it also has an effect on the company that is basing important internal decisions on faulty information.

By not using allometric scaling, a company also opens itself up to liability. The courts have consistently ruled in favor of plaintiffs that argue they were unfairly fired, demoted, or not hired on the grounds of unfair physical testing that resulted in discrimination.  This KKTV Colorado Springs article provides an overview of a case in which The City of Colorado Springs settled a discrimination lawsuit, paying out almost $2.5 million.

Should Allometric Scaling Apply to All Physical Tests?

There are certain jobs that require the candidate to be able to perform specific tasks, regardless of size and strength. For example, a fire department may have a standard requiring a firefighter who holds a specific position to show the ability to carry a fire hose of a certain weight a certain distance. A candidate either can or cannot complete the task, and allometric scaling doesn’t factor into the result.

However, in most cases, the physical tests administrated by police departments, fire departments, military branches, or other industries are used to establish a general grade of physical health (A grade, B grade, C grade, D grade, or FAIL). This grade is then used to determine who is hired or fired, who is promoted or demoted, who is allowed to move laterally into other departments within a company, and who receives a pay raise. Without allometric scaling, the results are unfair.

Therefore, our conclusion is that with the vast majority of physical tests, allometric scaling should be applied.

Why Should I Use the ESC Fitness Test?

Using allometric scaling creates a fair and balanced testing environment, which means that you won’t undervalue highly fit individuals just because their sex, body size, or age is skewing their test results. And you won’t unfairly penalize or lose qualified, talented workers due to bad testing policies.

As previous cases have shown, courts tend to rule in favor of those plaintiffs who were discriminated against during physical fitness testing. Making the mistake of using an archaic testing system can be very costly for a company or department. By using allometric scaling, you can show that you are making effort to control for differences in sex, body size, and age and thus providing fair testing for all. This helps to limit your liability and reduces the likelihood that a suit will be brought against you in the first place.

Reason #3 – It’s Easy to Implement Into Your Current System

Our system is customized for you. We can easily integrate our algorithms into your current test, or we can customize a test recommended for your company based on your needs. We provide training to employers and managers who wish to conduct the test themselves, or we can administer the tests ourselves, either in person or using remote video conferencing.

We also offer software support for implementing the program into your current testing protocols, and you will find that the transition is seamless. Our scientific formula instantly tabulates the results of the test, showing the candidate’s data and score with and without allometric scaling in place.

We provide extensive statistics, so you can review your own company and department’s stats and progress as well as compare your data to national averages and other similar companies.

You can also use the system to motivate your employees by creating individual and group goals for recruits and current employees.

ESC Fitness gives you the tools that will foster a work environment that is fair and promotes self-improvement and excellence for everyone. Contact us today so we can help you transition to a better, safer, testing system for all. 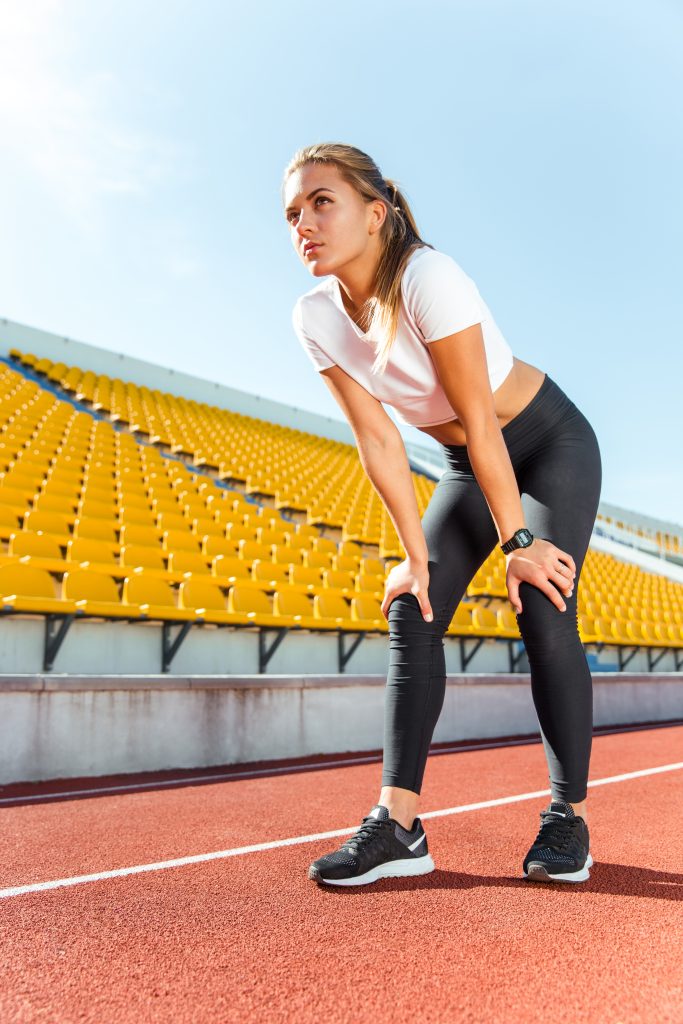 SUN
We are closed

Drop Us a Line

Don’t be shy. Let us know if you have any questions!